In 2013, NGOs gathered in London to launch the Campaign to Stop Killer Robots. Two years later, Dr. Kathleen Richardson and Erik Brilling launched the Campaign Against Sex Robots. This interactive installation explores the relationship between the two as well as examining our own reactions to sex robots against a background of technologies that are already gendered and sexualised. Please Touch is instigated by Charles Hutchins, a London-based sound artist, in collaboration with Jet Moon. 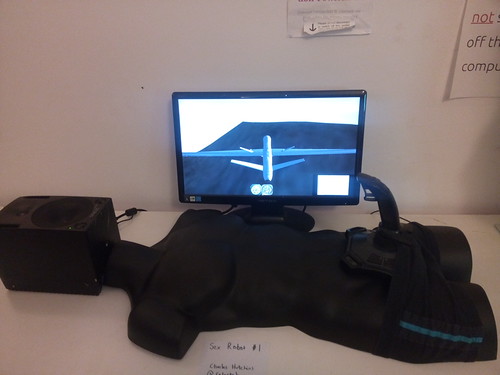 This robot is a shop dummy with a joystick mounted to its pelvis. The joystick controls a flight simulator running on a Raspberry Pi, which uses the Pi3d Python graphics library. The simulator shows a military drone model and, in the lower right hand corner, some footage from the US air force in Afghanistan. 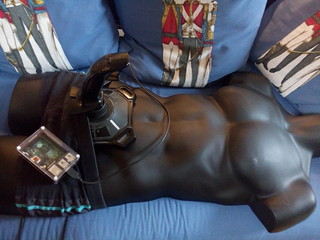 As the user manipulates the joystick, in addition to controlling the drone simulation, it also raises the ‘arousal’ level of the installation. When this crosses a threshold, the installation moans. As the level increases, the moans become closer together. After crossing a second threshold, it plays a different vocalisation indicating a climax and the simulation shows the drone to be firing a missile. The military footage shows a missile firing and hitting two targets.

This robot is also a shop dummy with an embedded bone-conductive speaker and conductive thread sewn into her lingerie. She is placed on a high surface so as to be taller than people approaching her. Users are instructed to hug the robot and place their head on her breastbone. The hug triggers the playing of one of four recordings, which users hear through their head’s contact with the robot. The recordings are the voice of and scripts by sex worker and collaborator Jet Moon, describing her experiences with clients, gender performance, engaging online audiences, and a reading of the phrases she uses to create an immediate impression of intimacy. 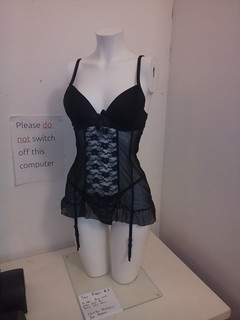 This robot also uses a Raspberry Pi computer with the addition of touch-capacitive hardware and a small amplifier. As with the other robot, it is programmed in the Python programming language. The computer is embedded in the robot’s back, making her self-contained. 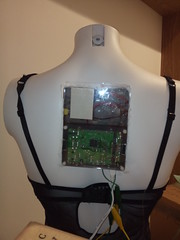 Words and voice by Jet Moon. Hardware, programming and recording by Charles Hutchins.

Sex Robot #1 and #2 have been shown at Autonomous Tech Fetish’s Antiuniversity Event at Common House, London, 2015

Sex Robot #1 has also been shown at the Sound Acts festival in Athens, 2016 and the Libre Graphics Culture and Practice exhibition in London, 2016.

This music free to share under a Creative Commons Music Sharing License.